The green, green grass of home… 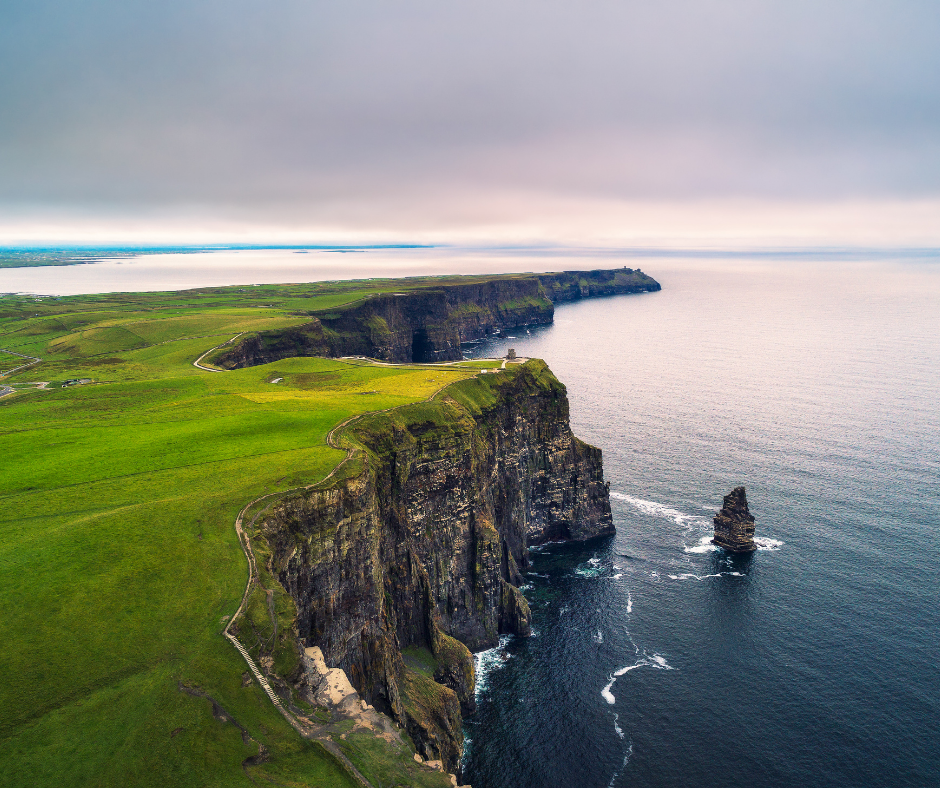 Have you heard about the Irishman who spoke with a German accent? Well, if you have, you are probably one of my friends, who know me as Bernd O’Dinnerty.

When I first arrived in Canada, I did not know much about the Irish. It was a long time ago on a trip to Vancouver when a couple invited me for dinner in a rustic Irish pub. While we enjoyed our food, a woman starting to sing some Irish tunes. The patrons in the pub didn’t need much encouragement to sing along. I remember that one of the songs involved dramatic gestures which almost everybody joined into. When the lyrics came to “Green alligators and long-necked geese, Some humpy-back camels and some chimpanzees,” the crowd went wild while using their hands and arms to show special features of the animals. I couldn’t help but participate. It was March 17. It was St. Patrick’s Day. That day I fell in love with all things Irish. I circled that day in my calendar and every year since then, I have managed to entice friends to celebrate St. Patrick’s Day with me.

My wife always calls me an Irish wannabe. Ann claims that her Grandfather actually immigrated from Ireland and I only married her for the credentials.

I was sure that my desire and love for Irish music, food, beer, and the occasional whiskey had some grounding in my DNA. What makes my foot tap when I hear the familiar Irish tunes? Why is it that when I see a glass of Guinness, my throat develops a dryness that only can be cured with the taste of that smooth, silky roasted barley fluid?

Then, some time ago, Ann and I spent a few days in Hongkong on our way to Australia. One day Ann recognized some of my frustration when we were unsuccessful in buying a camera because of some questionable sales tactics by some local camera stores. Ann knows me well.” I think I saw a sign for an Irish pub just down the street, Bernd. Why don’t we stop there and take a breather from shopping ?”. Ann sounded like a doctor suggesting treatment for an ailment to a patient. “Great Idea,” was my reply and we were off to the Irish pub.

It was in the middle of the afternoon and we were the only patrons in this fairly small establishment. This Irish pub reinforced our belief that Irish pubs are to be found in every corner of the world. After a refreshing glass of Guinness, we discovered a large map of Ireland on the wall displaying the location of ancient Irish clans. Ann did not waste time approaching the map to find her Grandfather’s Irish roots before he immigrated to Canada. After spending a few minutes to find her ancestors, who had lived in Tipperary, she returned to the table with wide eyes I didn’t find my family on the map, but I found an O’Dinnerty clan right on the border between Tipperary and Kilkenny’ “ REALLY?”

“Are you kidding ?“ I said while walking to the map. Indeed, there it was: the O’Dinnerty clan. That must be my ancestors. Over time, the O and the Y were dropped and this must be how my family name, Dinnert, originated.

So, after this revelation, I did my own research and it appeared that the last official reference to the O’Dinnerty clan was over 800 years ago when the Vikings were battling the Celtic Clans. Many of these clans also moved and settled in mainland Europe. Could the O’Dinnertys have settled in what is now known as Germany?

A few years ago we ventured to Ireland to get to know the old neighbourhood. We drove through Tipperary, had a Guinness in Kilkenny. Here we ventured into one of the many Genealogy information centers which you find on many main streets even in the smallest towns. We filled out a questionnaire,and the first question asked for the family name. I dared to write: O’Dinnerty. The next question: What is the name of the last known relative who lived in Ireland? When I told her that I don’t have a. name as it was about 800 years ago, she scowled. She ripped up the form in front of my face and let the pieces sail through the air to the floor. I was somewhat deflated, but really not surprized. Of course, they didn’t have any records from 800 years ago.

We carried on to the Rock of Cashel, an iconic historical landmark including a cluster of medieval buildings from the times the O’Dinnertys were occupying nearby lands. History came alive when we were walking through remnants of a graveyard with headstones which had deteriorated beyond recognition of the dead buried a few hundred years ago. “This one here might have been one of your ancestors” Ann suggested with a smile. “Let me take a photo. And why don’t you give the gravestone a hug?”. This caused me to burst out in laughter. In Ann’s photograph, it appears that I am crying over the gravestone as though I had an emotional reunion.

I am not sure whether any of what I told you has any validity. However, it is the pure imagination and joy of a possible connection to Ireland that makes me celebrate St. Patrick’s Day every year and enjoy the company of Irish friends, Irish music, and yes an Irish drink.

And because a virus prevents us this year to celebrate St. Patrick’s Day with friends, I offer you this Irish Blessing:

May the road rise to meet you,

May the wind be always be at your back,

May the sunshine warm upon your face,

The rains fall soft upon your fields and,

until we meet again may God hold you

in the palm of his hand.

Author: Lily
Filed Under: Writing a Memoir, Writing Salon
11 Good options to Self Publish Your Memoir

Sign up to get free writing tips and resources.

I’m Lily, founder, CEO, writer, author, instructor, and personal cheerleader to help you write your memoir. I’m the person most passionate about helping you write your book and empowering your creative self!

Whether you have just an idea for a memoir or a full-fledged manuscript in hand, we can coach you right from your first contact with us to guiding you on publishing or self-publishing. I started my career as a Journalist, made a living as a CEO of a technology company and am now helping others explore their creative selves and bring their stories to life. On any given day, you can find me listening to other people's stories everywhere from the playground, to the football stadium (GO Ravens!), to the local craft distillery or attending, supporting or perusing the creative works of others through the Maryland State Arts Council.